First, a tremendous “Well done” to all members of our team at the Bisley Junior International.  UK Scouting had by far its most successful competition ever. Competing amongst teams representing the USA, South Africa, Denmark, Lithuania, Great Britain, English Regional teams, Wales, Scotland & Northern Ireland, the team topped the medal table with a stunning total of 26 medals (15 individual and 11 team) of which 12 were Gold. The six additional medals awarded to “Springer Rifle” shooters within the Sporter class all went to Scouts.

We also celebrate the achievements of Matthew Man, Max Moore, Annabelle Bullock, Freya Giles & Elenor Perrett for their selection to shoot 50 metre prone rifle for Great Britain in the Drew match on 10th August and of the many “graduate” members of our squad now shooting for other GB & English Regional teams.

Congratulations and thanks to all the team and coaches, not just those at Bisley last week but also to all who have contributed to their development at squad training weekends over the last few years and to those who helped the NSRA staff the event, with particular thanks to Steve Batchelor and Trevor Draper for providing the Target Sprint class.

The list of medallists can be located on this link JI Medals August 2017 and a full set of results and a selection of podium pictures from the JI are available to download from dropbox.com at  https://www.dropbox.com/sh/59uwzoujyt0tjfk/AAApr9aZndvqEeF7pd7VxIhZa?dl=0 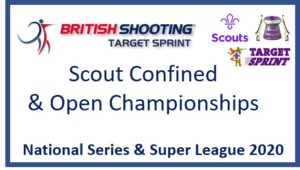